(title of a song by GANG OF FOUR) 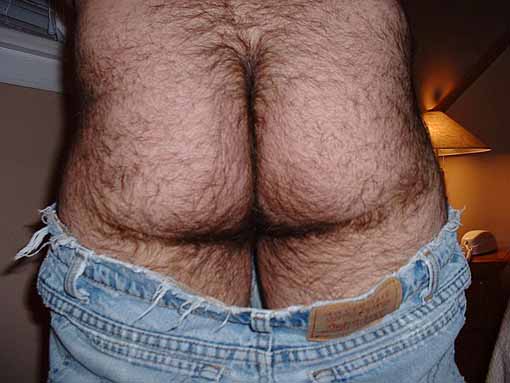 Under normal circumstances, I am not really fetishistically inclinedNo. When a man looks sweet, has a nice smile, and preferably dark eyes, some facial hair and nice buttocks - and naturally, shows an interest in me - I am ever ready to get more intimate with him, and his clothes don't come into play, as it were.

Well, the only advantage of a dressed man is perhaps that you can still undress him with your eyes Although, just like everybody, like everybody gay person, I naturally have my sartorial preferences. For instance, I am not crazy about black leather - black and green are not colours I would want in my wardrobe However, the severe uniforms of policemen, pilots or stewards do not excite my libido No, everything reminiscent of discipline tends to make me shiver, and men in suits and tie make me think of the less pleasant things in life, such as politics, lucre and bureaucracy.

So what turns me on, you might ask? Well, a naked man, naturally, and if he has to cover his nakedness, then he must at least do so in a cheerful and provocative manner, by wearing bright colours such as red or yellow, or by wrapping his private parts and buttocks in jock straps instead of brief, or by wearing excessively short jumpers so that you can get a glimpse of the hair round the navel, or by not wearing his trousers all the way up, so that the top cleavage between his buttocks can be seen. Ah, that buttock cleavage. As a fully-fledged pygomaniac - the scientific term for someone obsessed by buttocks-I simply cannot but put down on paper how a gorgeous man nearly made me dribble with lust and erotic longing twice yesterday, in the afternoon and at night, without having exchanged a word, let alone done anything else.

Yes, it was yesterday. And yesterday was February the 14th - Saint Valentine's day - and naturally I had rather sombre thoughts with my first cup of coffee I began to brood how my own failed relationships, and especially with Giulio from Viareggio, and about the fact that perhaps no one would give me a call, let alone flowers, to wish me a happy Saint Valentine's day. Alright then, the sun was already up in the sky, seemingly to announce the spring, and as I always try to be a rather sunny person, I did my ablutions, put on a worn pair of jeans and a fiery red turtle neck jumper, and left my apartment, heading for the Rogierplein, to a flower stall to buy a bouquet for myself - a large bunch of yellow tulips. And who was the first beautiful man to cross my path day? You guessed it, a refuse collector, a dustman who with his cart and broom was coming sluggishly up the Martelaarsplein in my direction, a hunk of a dustman to be sure, with hefty legs and broad shoulders and a massive head with stubble which inadvertently made me think of the bust of the Roman emperor Philip the Arab, although he was rather less Caesarly and groomed in his dirty fluorescent yellow overalls and an excessively short woollen jumper. And after I had passed him with a feigned indifference, I naturally turned, ever discretely, a few metres further, to see whether his backside was as arousing as his fleshy lips and thick nose and his bushy eyebrows. Oh my God. His backside! Not only was our dustman the proud owner of a pair of round, curvy buttocks, but on top of it all he, as many workers are wont, had not drawn up his trousers sufficiently, so as to afford the passer by a fine view of the roughly top six centimetres of his buttock cleavage and the triangular hair above it. I felt the blood flush in my temples! I went to collapse on a bench in the square, lit a cigarette, and was able to observe our glorious bear go about his daily task. First, he collected a couple of empty tins of beer and cigarette packs with his broom, and then bent over -can you imagine the sight? -- to shovel up the west with a dustpan. He then went over to a public dustbin, and emptied the contents into his cart. And finally. Finally he noticed a porno magazine between the banana peels and other leavings. And what did he do then? He cast a surreptitious glance around, and naturally I avoided eye contact, and then rolled up the magazine and put it in the deep side pocked of his overalls as nonchalantly as possible. Well, evidently, I was not the only one who likes pornography.

With a vase full of Amsterdam tulips before my eyes, I masturbated nicely about an hour later at my writing table, fantasising about the buttock cleavage of my dustman. And then I sat and thought about my own relationship with pornography.

Ah, Pornography! Ever since I secretly started crossing the Dutch border to get little dirty pamphlets when I was sixteen, I have built up a real archive in my bachelor's pad, and I sometimes feel about uttering semi-revolutionary slogans such as "pornography will save the world!" And what does my collection consist of? Well, some thirty albums with transparent plastic covers, in which I, over some twenty five years, I have patiently stored my favourite pictures from soft-core magazines with names such "Honcho," "Inches," "Black Inches" and "Machismo." And yes, naturally, a development can be perceived over the years. In the seventies, our models were still somewhat thinner, although naturally with virile moustaches and sometimes with a beard, and indisputably, the most successful example of this pre-AIDS era, was Al Parker. My paper harvest from the 1980s is somewhat less extensive, probably because I was never an adherent of the Rambo look, nicely shaved bodies in other words, to emphasize the pumped up muscles! Things are different, for the 1990s and the first years of our new millennium! To my ecstatic joy, the porno industry apparently opened up completely, and the so-called minorities, that go against the ideal of the Western, white man, were given the opportunity to take their clothes off in front of the lens, such as blacks, Latinos, and Turks. Another wonderful aspect of contemporary tastes consist naturally of cuddly, hairy bruins, and tattooed kinky guys and the fact that the backside and the arsehole are showcased more than ever.

And yes, between the predominantly intellectual and rather insipid types present, he was like a lump of pure eroticism that came walking in. He was properly scrubbed, though fortunately still unshaven, and wore very tight jeans and an ever so clean brown overcoat. What I thought I noticed, however, was that he was somewhat nervous, or better yet, provocative. He quickly ordered a beer, drank half of it as quickly, and put it on a beer coaster, and then walked as discretely as possible to the men's toilet. A minute later, I made my way to the men's toilet too, where I stood in front of a urinal. My dustman had withdrawn in a cubicle for his heavier needs, and the very idea was making my member bulge. Because, from the back, the chink under the door, I could get a glimpse of his beige moccasin shoes, and his trousers, which he had apparently let drop to his ankles. As an additional aural reward, there were clearly recognisable masturbating noises, and moaning, first still soft, then gradually louder, and finally a cry of "raah" which betrayed great joy and relief. Then I thought I heard the rustle of toilet paper and then his belt buckle snap into place again. The show was over.

And what did I do then? When my dustman had left the toilets, I stepped into his cubicle, where on the dirty tiled floor lay open the porno magazine that he had fished out of the public dustbin that afternoon. It was open in the centre fold with a photo of Roberto Malone's buttocks, and his penis that served a vagina, and was completely covered with sperm. And, naturally, I dipped my finger in his seed and brought it to my lips, and then rolled up the dirty magazine, put it in my jacket, and took it as a souvenir. And what do I think of when I look at it? Naturally, of my sturdy dustman and his buttock cleavage, and also of his private life: he probably had a wife, who did not fall often enough for his rough and ready charms, and he could not satisfy his pornographic needs at home with his wife and children there. Indeed, although I am naturally still dreaming of a fixed relationship and of living together with another man, a bachelor's existence has its little advantages now and then. What I am also dreaming of, is to be able to meet my dustman again, in a sex shop, for instance, or in a porno cinema.