Up to the mountains...

A short story by: Jan Masny

I am a sea man, born at sea, and living by the seaside: I'm sure that my veins contain more sea water than blood. I cannot imagine a life without sea. It's so nice, and the feelings and strong emotions that sea can give you are not comparable with anything else.

Anyhow, with the years and thank to a good friend of mine I learned to love and respect the mountain too. So when I'm just a little bit tired and stressed by city life, job and so on, I catch the car and in a couple of hours I reach the mountains , to regroup myself, to enjoy the calm of such a place, and to bet one more time with myself.

Well, this year too, at the beginning of July, I spent one week of healthy vacations up to the mountains, discovering relax and a very good friendship in a nice little quite paradise ...

I had an apartment into a nice and elegant condo at San Martino di Castrozza with a sight view facing the mountains of Dolomitis: a nice landscape. Dolomitis are unique in the world, for their colors, and atmosphere that they can create during the day and at the sunset. ( Yeah, after all I'm a romantic!)

Well, enthusiastic with this new experience, I organized my daily excursions.

The first day passed very fast: I walked up to 2,500 m., had little snacks into a typical mountain restaurant, resting on the green grass fully of daisies, flowers, and sometime of cows' not very good smelling stuff!!!

I met several persons during the excursions, some were nice, others not at all, but not a single chance to have a conversation or to hook any of them. What a pity: mountain people is so hunky....Well I returned back to the apartment, I was tired but happy: the view of Dolomitis gave me a lot of joy and I would have liked to share it with someone else. The balcony was very large, the apartment had 2 bedrooms with 4beds, one kitchen, a fire-place and bathroom.

I had my dinner, then went out for a drink. Stopped at a very nice and typical bar, all wood made, and very warm. Asked for a Grappa, the waiter was very nice!! Looked all around but I couldn't find any nice face/person, so, after a while I left the bar. While on the entrance, my eyes met a face, so unique and very very interesting. A nice guy, our glances crossed for a little, then we went by our own ways.

I turned back to look at him again: he was looking at me too. Nevertheless he left. What a pity: he was so nice, and so extremely interesting!

Well, sadly I returned at home: thinking about that nice bear I jacked off . I couldn't sleep because 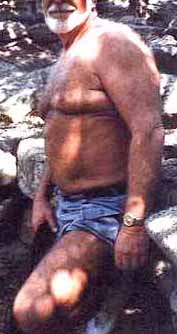 I was extremely troubled by that man vision. He had to be mine. The morning after, a very nice and warm day, I left again for my excursion. I wanted to visit two little lakes up to 3,000 m. I was wearing short leather trunk, shirt, and my bag on shoulders. Going up and up, sometimes I turned back just to see if those eyes without a name were passing by, but unfortunately he was not around. It was about 1:00 pm when I stopped at a snack bar for lunch. I asked for Polenta and mushroom. They served me including a quarter of red wine, that was ment to give me happiness and to take away all the troubles (That's what the waiter said!!- try to believe me ). I was eating , alone. Someone asked if the seat next to me was free. It was him.

Then he smiled at me, and embraced me warmly. I felt his erected cock while embracing me, he was excited just as me. We walked until we reached the two lakes. They were terrificly beautiful as Bruno's eyes. We sat down for a while, to watch at the landscape, and to hear the sound of silence all around. I heard his breathing, so slow, so quite, so peaceful. There were not too many people around. Told him I was going to have a swim.

Took away all my cloths, left only panties ( Lycra made) and ran into the water. Water was so cold, but so nice. Went back after the swimming: Bruno was sitting on a blanket, and another one was aside him. It was for me. He was having sunbath dressed by short trunk only. He was so masculine, so virile. The color of his skin, his face, his eyes was exciting me, and I couldn't hide my excitation.

I was lying aside him enjoying the warmth of the sun, when his hand touched my head. I looked at him, and he said - sorry I was sleeping, I didn't want to disturb you. After a couple of hours, we put our cloths on and began to return back to the town. We stopped at his hotel to pick up his luggage. We were walking side by side and I was very anxious to get home. Air was fresh, the sun was blinding us, and the shadow of his silhouette was smashing on the front door. He was looking at me like a person who knows everything about you. We went into the apartment and sit down a while. I asked him if he wanted something to drink, and he gently asked for a tonic water. Meanwhile I went into the bathroom for a shower. My cock was extremely hard, due the presence of my guest; the hot water couldn't relieve my hard on, but on the contrary excited me more and more. While I was finishing my shower, Bruno came in.

He was wearing only a boxer panty, his torso was naked, barefoot, and a little pink head was watching from his flap. His chest was sexy and very hairy, two nice large pink nipples, a strong belly, and muscular abdomen. His face was so beautiful, his eyes were as a laser beam passing me side by side, striking at heart. He looked at me, but most of all he looked at my cock and said very nice! Took off his panty and showed his sex. Nice cock even if only mid-erected. Nice, it was so tender!!And a nice pair of large & soft balls. I came out of the shower. He stopped me. Hug me strongly , opened my mouth and kissed me. His velvet tongue was exploring my mouth, caressing my throat, his cock was getting up and up and I felt its warmth and rigidity against my belly bottom.

He pushed me into shower again and under the hot water we started to play, kiss, touching each other.

He was so hunky and virile but so gentle at the same time. A very old fashioned gentleman.....

We went out of the shower. Bruno asked me if I was hungry, I said yes: of YOU. He laughed, his smile passed through me again. He was hypnotizing me. He took me again, and hug me as strong as he could.

His body was so manly perfumed, he caressed my head, and sang a little and very lovely lullaby. I asked him what that song was. He said it was just a lullaby that his Grandpa sang to him when plying together.....

What a tenderness. We stayed embraced for a little more, then we went into the bedroom. The window was opened on a nice landscape on Dolomitis, so nice and gold colored, a terrific blue sky, and an eagle was flying higher & higher. Still embraced we fell down to the bed. Bruno started to kiss me all over, stopping on nipples, he kissed and bit softly, and suck them hungry.

Then when he reached the cock. He stopped to watch it, then swallowed it deep down into his throat. I felt the warm of is mouth, the caress of his tongue, his hands were massaging my balls. Then he released my cock and swallowed my balls. He swallowed both of them together ( and believe my balls are not small), he played with them as nobody had never done before. My balls were going up and down in his mouth, in his throat.

He was doing all this hypnotizing me once again with his glance. I was under his fully possess, I was feeling as a ship in a storm, that left herself adrift, and forceless. After that he continued his game, biting my legs, and sucking my toes, alternatively like a blow jobs. What a strange sensation. I was moaning and moaning, my frenzy hands were touching his face, his head, his hair, his beard. Some broken words were spoken out by my mouth, words were fully of joy and passion, and I would have had that guy in me, upon on me, but he continued for his own way.

Suddenly he turned me, my back was facing him , and he said - I think you are strong enough to hold me. I did not understand what he was going to do, but I was sure that I would do whatever he would like to do.Well, I was turned with my belly on the bed, just a little bit curved due the erection, my muscular buns were offering themselves to him. Bruno stood up, and shifted toward the bed edge, and began to walk on me. The heat of his feet on my shoulder, gave me a lovely sensation never felt before, then he stopped on my buns.

His cock was nice, gorgeous, but even more beautiful were his balls: large, hairy and filled with sperm. He smashed my mouth against his balls. They were so big that I couldn't take all at once. Then slowly slowly I swallowed all his soft meat. My face was smashed by his cock, while my tongue was servicing his balls.I was completely out of my mind, his masculine taste, his perfume, his body was knocking me down.

Bruno shouted at me : C'mon man fist my hole, let me see how a man like you can please me. He enlarged his hole as much as he could. I saw the largest ass hole I had ever seen. Slowly and patiently I started to fill his ass by my wet and lubricated hand. I was feeling his meat openening on my push, and this deranged my mind. When the full hand was inside, Bruno asked me to slowly open and close the hand inside him. His voice was broken. His face was red, his body was curved as a violin chord. Then he cumed, and all his cum felt on his magnificent sweaty body. He asked me to gently pull out my hand . My hand was out and his cavern slowly closed again. His hole pink and brown colored had peace and closed as a rosebud.

I slept for a dozen of hours, waked up looking for him, but his body was not aside me. Scared to have lost him, I stood up from the bed, and ran out the bedroom to look for Bruno. Once on the door, I saw him coming toward me with a hot cup of coffee and his shining smile on his face.

Once again he hypnotized me with his eyes. He stopped a while looking at me and said - Good morning my little big man, I am here for you. My arms ran around his neck, I kissed his lips. It was only the beginning of those five incredible days to be lived together up to the mountains, faraway from city hassle...